While the Philadelphia Phillies are headed to the World Series for the first time in 13 years, Widener’s connection to the Fightins spans much longer.

Over the years, students from across majors have interned for the 139-year-old franchise, and alumni have gone on to work - and even play – in the organization. With the team so close to campus, Phillies staff also serve as guest speakers at university events, building relationships with students and alumni.

It’s the morning of the Game 1 and according to Joe Rauch ’09, the energy in Houston is palpable.

“The energy in Houston is good, but it’s nothing compared to the energy in Philadelphia right now,” said Rauch.

The physical therapy graduate is an assistant athletic trainer for the NLCS champions. He joined the Phillies clubhouse in 2015 as a minor league medical rehab coordinator before getting called up to the Phillies’ medical services department in 2020.

“I treat our players and concentrate on preventative medicine by keeping them healthy, keeping them on the field,” Rauch said.

Rauch always envisioned a career in sports medicine. He came to Widener’s nationally-renowned program with a background in rehabilitation science and athletic training. He credits the immersive program for introducing him to a wide assortment of specialties within the field and shaping him into a well-rounded clinician.

“I was exposed to physical therapy from a sports and orthopedics side but at Widener I was able to explore all of the other opportunities that existed within physical therapy,” Rauch said.

In addition to the robust academics, Rauch noted that support from physical therapy professors like Dawn Gulick and real-world experiences from staff like AJ Duffy, Widener’s head athletics trainer, were critical to his success.

Now, as an integral member of the Phillies medical staff, Rauch is focused on keeping the roster healthy and primed to bring a title back to Philadelphia.

“Philadelphia right now feels like it’s a burning ember of energy and it’s so much fun to be a part of. I can’t wait to get back to Philadelphia to see what the city has in store for us,” Rauch said. “I know it’s going to be electric.”

“It was like a dream come true,” O’Brien recounted. “I was drafted by the Phillies franchise in the winter of 1976. Everything was done first class. The Phillies were one of the best organizations in baseball.”

A lifelong Phillies fan, O’Brien played in the Phillies minor league system for two years before hanging up his hat. Some of his fondest memories revolve around the teammates he played with and the connections they made.

While he doesn’t live in the Philadelphia area anymore, home-team baseball is still in his blood, and O’Brien tries not to miss watching a game on TV. He credits much of his baseball career to longtime Widener baseball coach, Harry Miller, and the two still speak regularly.

Current Widener students find invaluable internship experiences with the Phillies organization, many at the nearby Citizens Bank Park in Philadelphia.

One such student is Mason Broomall ’25. The sport and event management major landed an internship over the summer of 2022 at the park as a concession’s supervisor with the in-house dining provider, Aramark. Broomall’s role helps to ensure concession stands are stocked and ready for fans when they come to the park to cheer on the Phillies.

“It is a cool and fun job - not only are you part of the sporting atmosphere, but you’re also part of the business and sales side as well,” Broomall said.

Broomall’s internship experience went so well that he was invited to return to the job again for summer 2023. Having been in the stadium around fans and players during the now-championship season, Broomall is excited to have played his role in the experience.

“It feels really exciting, and I am happy I have been a part of this journey through all of the ups and downs,” said Broomall. “This is definitely a cool job, and I can’t wait to go back to it next year!” 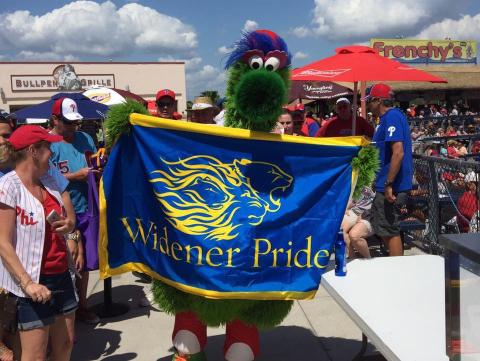 Widener students have a history of being politically engaged citizens and having exceptional voter turnout. The Wide(ner) World of Sports

International student-athletes have found a second home playing for the Pride. Embraced by the campus, these students bring new perspectives, both on the field and off. Widener's School of Business Administration's Future of Work Conference brought learning and networking opportunities to students to prepare them for the ever-changing professional landscape.